I bought a copy of The mushroom at the end of the world last year, but I've been waiting for the right time to read it. It's referenced in a couple of other books I've read in the last year, and I had high expectations, so wanted to be in the right frame of mind to appreciate it. It doesn't disappoint. Anna Lowenhaupt Tsing takes us on a journey from Oregon, across the Pacific to Japan, through to China and on to Finland – in search of Matsutake mushrooms and what they show us about both modernism and capitalism.

It's an extraordinary book: an academic study that rejects the norms of academia; a story of international supply chains that ignores transport logistics to focus on individual workers; an examination of what Tsing calls 'pericapitalism' – salvage practices that sit both inside and outside capitalist modes of activity. What I want to focus on here, however, is Tsing's examination of scale, and names. Perhaps it was always there, but I've increasingly noticed over the last few years an obsession in both the tech world and within libraries for projects and services to be scalable. This is generally understood to mean they are able to become bigger – deal with more users, or more data – without major changes to the underlying structure. But Tsing provides a more interesting take on scalability (my emphases):

Scalability ...is the ability of a project to change scales smoothly without any change in project frames. A scalable business, for example, does not change is organization as it expands. This is possible only if business relations are not transformative, changing the business as new relations are added. Similarly, a scalable research project admits only data that already fit the research frame. Scalability requires that project elements be oblivious to the indeterminacies of the encounter ...scalability banishes meaningful diversity, that is, diversity that might change things.

I've been wary of prioritising making things “scalable” for a while, but couldn't quite place where my unease was coming from. Whilst it's implicitly obvious that “we can scale this up easily” means “we can have this system interact with more people/things without it being changed”, when Tsing made it explicit that this is what “scalability” means, a lot of things fell into place for me. But she also provides a warning about fetishising non-scalability and the idea that “small is beautiful”:

It would be a huge mistake to think assume that scalability is bad and nonscalability is good... The main distinguishing feature between scalable and nonscalable projects is not ethical conduct but rather that the latter are more diverse because they are not geared up for expansion. Nonscalable projects can be terrible or benign; they run the range.

I think librarians often have problems understanding the appropriate scale to work with. There are many things we do in libraries at a very local scale, customised to and operated as bespoke systems. A lot of them don't need to be small scale, and would be much more effective and sustainable if resources were pooled and more large-scale systems and processes used. But you know that story: library managers and consultants have been telling it for years, mostly as a way to reduce the expense of hiring people with specialist knowledge. In some ways the more problematic issue with scale is in the things where the inverse applies. The primary candidate (and sorry if you've heard this from before) is the taxonomies and classification systems we use in library catalogues and discovery systems: Modernist creations like Dewey Decimal Classification (DDC), Library of Congress Subject Headings, and even Moys Classification are used internationally, even though they were not really designed for that. UDC is sometimes claimed to be the superior alternative to DDC due to its international design, but it's still a Modernist project claiming to 'cover the whole universe of knowledge' – a pretty hubristic statement.

This is where Tsing's notes on 'contamination' and names, slightly earlier in the book, become relevant (my emphasis):

We are contaminated by our encounters; they change who we are as we make way for others. As contamination changes world-making projects, mutual worlds – and new directions – may emerge. Everyone carries a history of contamination; purity is not an option... This changes the work we imagine for names, including ethnicities and species. If categories are unstable, we must watch them emerge within encounters. To use category names should be a commitment to tracing the assemblages in which these categories gain a momentary hold. Only from here can I return to meeting Mien and matsutake in a Cascades forest. What does it mean to be “Mien” or to be “forest”?

What would it mean to build library discovery technologies with “a commitment to tracing the assemblages in which categories gain a momentary hold”? If we worked on identifying the points at which identities and categories interact and change, rather than endless debates about which specific word to use when affixing a category to a particular person, concept or work? If our systems revealed what happens to the identity of pin when angels dance on one, rather than debating how many angels there might be?

How identities change through interaction was also on Kelly Pendergrast's mind in Who goes there, a piece for Real Life Magazine. In this rumination on how online security questions reflect the preoccupation and demands of the dominant class, Pendergrast puts a finger on some disturbing truths:

Security questions rest on unexamined assumptions about what constitutes identity, and what biographical details can be assumed as universal, private, and memorable to internet users. They are a form of quiet disciplinary power; specifically, they help enforce the hegemonic subjectivity required to provide an effective and sustained labor force.

I will resist the temptation to quote every second paragraph, but this is a great companion to Tsing's book when it comes to thinking about what identity means and how classification schemes both warp our sense of reality and act to communicate certain messages about who does and does not fit within the bounds of acceptability.

For something related but a little more lighthearted, you might like to read about the research project that set up adversarial AI systems to turn pictures of giraffes into pictures of birds.

If you want to map out how interactions can change taxonomies, or something else, you might like to look at drawio – a free open source diagraming tool that works in a browser. Or for mapping of a different kind, check out the amazing City Roads, where you can make city maps like this: 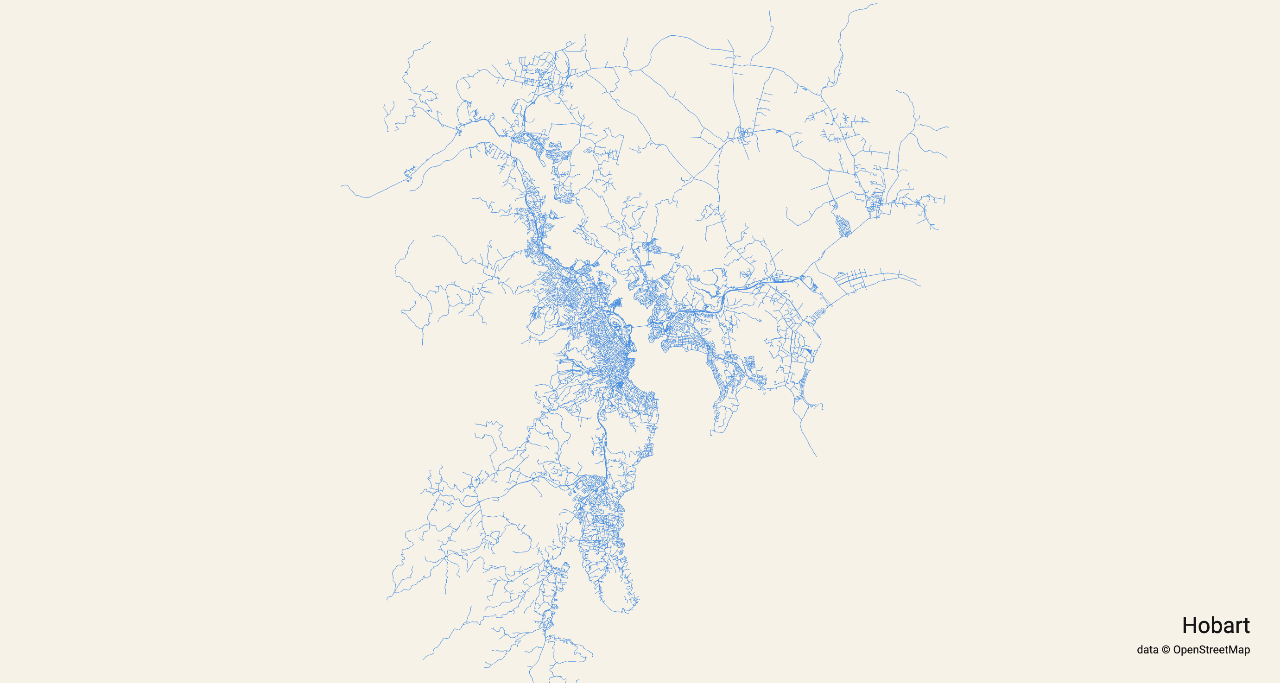 Of course, The Virus has been on my mind as much as anyone's. You're probably avoiding reading about it by now, but I did think a few articles were worth checking out.

The first was in, of all places, The Chronicle of Higher Education. Mark today in your diaries because it may be the only time I ever recommend you read something from The Chronicle:

The answer to the question everyone is asking — “When will this be over?” — is simple and obvious, yet terribly hard to accept. The answer is never.

Why you should ignore all that Coronavirus-inspired productivity pressure is not unique in its main thrust, but does have some great thoughts from Aisha S. Ahmad, who has a lot of experience working in places that are experiencing or recovering from catastrophe.

Ed Summers has an interesting piece about archiving COVID-19, and how Jupyter Notebooks have the potential to change the way web archiving is done – not just on a technical level but also in terms of philosophy and theory:

...one nice thing about working in Jupyter, rather than creating an “application” to perform the collection and present the results, is that notebooks center writing prose about what is being done and why. You can share the notebooks with others as static documents that become executable again in the right environment. I think we must consider adding to our toolbox of web appraisal methods, to do more than simply ask people what they think should be archived, and to factor in what they are talking about, and sharing. Using Jupyter notebooks could be a viable way of both doing that work and providing documentation about it.

Finally, as someone who suddenly found himself managing a remote team from his kitchen table four weeks ago, I really appreciated Mandy Brown's The hard way, which provides some advice to people – particularly librarians – suddenly thrust into this new world:

The first lesson on leading a remote team when the world’s on fire is the most obvious one, but it’s shockingly easy to miss: the operative phrase is not remote team but world’s on fire. This is true whether you’re a veteran of remote practices or you have recently had to instruct people in the correct use of the mute button on video calls.

I think I'm mostly getting things right, but it's hard for everyone right now.

Stay safe, I hope you get time to do some reading of your own.