Welcome to edition 31 of Marginalia. It's a beautifully crisp Spring morning in Melbourne as I write this, and it feels like a lot longer than a month since the last edition. I guess I've been busy? Anyway, here's a month's worth of what I've found most intriguing, fun, or important from the Web over August.

On my favourite Leftist technology podcast, Tech won't save us, Kevin Driscoll was recently interviewed about How the Modem World Shaped the Internet. No, that's not a typo – Driscoll uses the term Modem World to describe the internet that came before the Internet, that piggy-backed on the telephone network to send data not via “packet switching” but rather through raw sound. If you've never seen an acoustic modem before, the setup looked a bit like this: 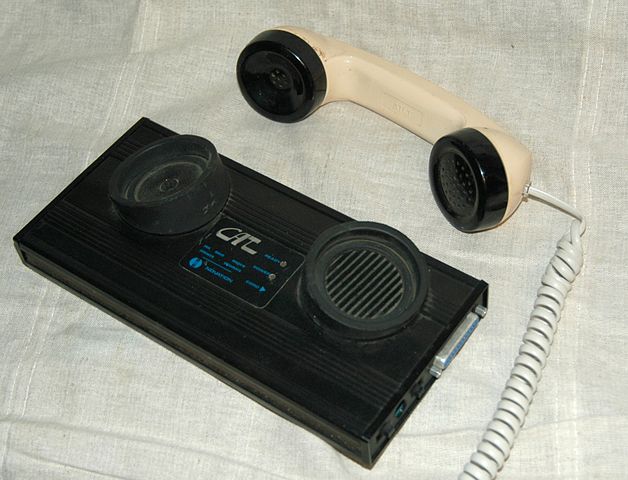 This interview is a really fascinating additional history of the Internet — or perhaps more accurately, internets. Driscoll doesn't claim to be debunking the more widely understood history of interconnected computing. Rather he has uncovered a huge part of the story that has largely been untold and unknown to most people. Whilst this is all fascinating in its own right, I found it particularly interesting as a commentary on how archival practices can radically affect the stories societies tell about themselves, and therefore how we understand ourselves and our potential as people and communities. Paris Marx and Driscoll talk about how government funding and institutional backing of academics and military technologists has left a large and (presumed) intact corpus of documentation about how the ARPAnet merged with academic communication networks to become The Internet. But at the same time, a much larger set of people — mostly but certainly not exclusively in the USA — were using local dialup services for all sorts of things, primarily based around bulletin board systems. Because they were distributed, small, private, and independently run by enthusiasts, most of these networks and services didn't leave much or any trace in the “official” histories and archives. There simply are no archives for a local bulletin board run in a small city for 3 years from someone's living room.

Jay Hoffman brings us an Internet history of a different sort but with similar energy, in their article The Long Tail of Uselessness. This piece tells the history of an early Web site called Useless Pages, which was essentially a long list of web pages considered of little or no utility to anyone, sometimes including the author of the page.

Each was tagged with a comment from [Steve] Berlin, using the tone and semiotics that came to define the early web; a blend of sarcastic detachment, pop culture reference, and a genuine interest in the mundane. A slightly later version of Useless Pages featured a link to pictures of kids beating the crap out of a chair with Berlin’s added comment, “I think this is the future Stanley Kubrick had in mind when he directed A Clockwork Orange”. Attached to a link to a site built to always tell you Yes Berlin added, “I know people like this. And they’re as annoying in Real Life”.

There's been a bit of discourse in Australia recently about railways. As is so often the case in this country the mainstream consists almost entirely of hot takes lacking any ambition, acknowledgement of transport economics, or recognition that we are in the midst of a climate emergency brought on by the burning of fossil fuels. So — setting aside the election-influence tantrum the New South Wales government is currently throwing about rail workers not wanting anyone to die on their trains, and the hand-wringing in Victoria about “cost-benefit studies” on the outer suburban loop that is already under construction — it was interesting to see Philip Laird's article in The Conversation, More than ever, it’s time to upgrade the Sydney–Melbourne railway:

there are no cities in the world as close to each other with such large population as Sydney and Melbourne which are linked by so bad a railway.

If policy is a bit too much for you today, why not relax with some Ambient Scotrail Beats? This site came about as a result of a (unrelated, I think) Freedom of Information request for all public message recordings from the Scotrail network.

Now that you're nice and relaxed, your brain will be ready for something a litle heavier. Dismantling the apparatus of domination?: Left critiques of AI is a piece by Claudia Aradau and Mercedes Bunz in Radical Philosophy. Aradau and Bunz take us on a tour of Left critiques of AI, as you might expect from the title, and there is much that you may be familiar with already. One aspect I found particularly intriguing was a comment on the framing of certain activities as 'service':

Describing AI as XaaS blurs the distinctions between productive, unproductive and reproductive labour. The language of ‘service’ has been rehabilitated in public imaginaries of health and welfare services. Situating AI within the service sector rather than the manufacturing sector not only effaces microworkers and crowdworkers, but also obscures the multiplication of labour statuses and the blurring of boundaries between different forms of labour.

This article is about “Artificial Intelligence” and technology companies, but as I read this I couldn't help thinking about how I've always been uncomfortable with public libraries being referred to as “Library services”. It has always seemed to obscure important aspects of library work and libraries as solid objects in space and time. One could easily make the case that for libraries, too, positioning them as services “obscures the multiplication of labour statuses and the blurring of boundaries between different forms of labour”. But my discomfort is a little more than that. Libraries are for use, certainly, but at their best they are fundamentally different to a retail or health 'service' in ways that I perhaps should expand on somewhere other than this newsletter. So let's move on to what I think may be the key point in this whole paper (with my emphasis):

Behind the hype about automation through AI models one finds the much more real politics of datasets deciding what can be detected, and what can remain unseen. Or in Adam Harvey’s words: ‘Becoming training data is political’.

I think about this every time I have to complete one of those stupid CAPTCHAs about traffic lights or bicycles, knowing I'm helping to train Google's self-driving car project. The authors also write a lot about artificial distinctions between humans and others:

Which brings us nicely to a totally different critique of what intelligence is and whether it can ever be artificial. Doug Bierand writes in Entangled Intelligence:

Capitalism has always depended on a dualism that upholds the human mind as separate from the crude matter of biological life. As economic anthropologist Jason Hickel notes in a recent episode of the podcast Upstream, that sense of separateness was central to overcoming the “strong moral and cultural barriers that prevent you from damaging and exploiting the ecosystems on which you depend.”

This article is just absolutely amazing, distilling much of the broadening discussion of the last few years around what it means to be human and living in the world.

If our minds are exceptional, it is still only in terms of their relationship to everything else that acts within the world. That is, our minds, like our bodies, aren’t just ours; they are contingent on everything else, which would suggest that the path forward should involve moving with the wider world rather than attempting to escape or surpass it.

Bierand also drops in some excellent book suggestions – check it out!

To round out this month's marginalia, a couple of articles that if I was writing a LinkedIn post I might say are about personal productivity, but since I'm writing instead for my own newsletter I can say more accurately that they are about how to think more deeply and learn to do the things you yearn to accomplish.

Katherine Firth has a wonderfully simple analogy in Research Insiders — Front burner/back burner work. It's positioned as being about academic writing but is a fantastic metaphor for any “information work”, and useful for thinking about how to manage teams of information workers. Some team members really want ot focus on back burner work and resent having to do front burner work. Some team members have trouble getting started with or checking in on the backburner work because they're overwhelmed by the front burner tickets or they need the dopamine hit of seeing regular progress. Sometimes you need to go for a walk, bake a cake and let your brain do some work in the background to solve a problem or turn over ideas. And sometimes you just need to get on with it and smash out some emails or position papers or code or whatever.

Speaking of just smashing things out, our last article is from Simon Sarris, a great piece on his Substack called Start With Creation:

it is an error to wait around for inspiration, or to demand some feeling of readiness for an undertaking, or for a teacher or some other golden opportunity. I think these slouching inclinations come partly from an overly-systematized experience during childhood school years, and partly from a fear of failure. In fact, when you stop waiting for others—for either their permission or instruction—and instead begin on your own, fumbling through, regardless of how ready you are, this could be considered one of the true beginnings of adulthood.

We all know this, but — particularly or those who have had traumatic experiences being punished for real or perceived failures to match up to some arbitrary standard — it's still damn hard to stop being terrified of the blank page, the first step out the door, or the 'Apply now' button.

Failure is something you want to tempt. You should court it the way the bullfighter courts the bull. When I wish to learn something, I begin with this in mind. A meaningful first project should have sufficient difficulty that there is some real chance of failure. It is in approaching the edges of our abilities that we are really learning, and often simple projects feel more like delaying things, including delaying mastery. A chance of failure ensures your hands are firmly touching reality, and not endlessly flipping through the textbook, or forever flirting only with ideas.

We can (and should) talk about how this attitude assumes a certain level of privilege another time. But if you've got that space available ...seems like a waste not to use it.

Marginalia is an email and web newsletter about things that made me think over the last month – articles, books, podcasts, and perhaps from time to time some videos. It comes out on the first Monday of every month. You can subscribe by following @share@marginalia.hugh.run on any ActivityPub platform (e.g. Mastodon) or via email using the form below.

You might also enjoy my weekly newsletter Libraries & Learning Links of the Week, or my irregular blog Information Flaneur.